Some may argue that this is the most spectacular feature of the show! Over 20 steam heavy haulage road locomotives will be at the 2013 show and you can see most of them in action in the heavy haulage area pulling vast loads of granite & machinery on huge trailers. They really are the big boys of the show, very powerful and originally built for moving heavy loads on trips of tremendous distance that used to take days! These locomotives are highly geared, have rubber tyres and sprung suspension. Sometimes they worked in twos and threes and often with an engine on the rear of the load to act as a brake! At the show you can enjoy Locomotives built from the 1890s and early 1900’s such as the Burrell “Lord Kitchener“ and the McLaren “Boadicea“.

Alongside the steam road “locos” you will see the display of the more modern diesel heavy haulage featuring some of the biggest internal combustion engine haulage lorries built. Look out for Geoff Nurse“s ‘Scammell 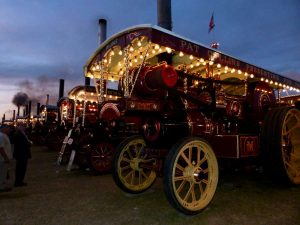 Explorer’ heading up Mike Fincher“s ‘Thornycroft Mighty Antar’ as they cross “Watford Gap” for the accent of the Haulage Hill. One and all having fun in the Heavy Haulage Ring (affectionately known as the playpen)!

Steam Tractors are traction engines with special gearing to make them suitable for lighter haulage work. Often very nippy they were ideal for pulling one or two heavily laden trailers from field to farm or from railway station to goods yard and vice versa. Over 30 of these engines can be seen in the haulage demonstration area.