The first connection between the North and Baltic Seas was constructed while the area was ruled by Denmark-Norway. It was called the Eider Canal, which used stretches of the Eider River for the link between the two seas. 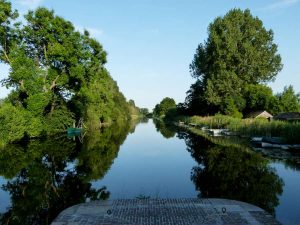 The Eidercanal was completed during the reign of Christian VII of Denmark in 1784 and was a 43-kilometre (27 mi) part of a 175-kilometre (109 mi) long waterway from Kiel to the Eider River’s mouth at Tönning on the west coast. It was only 29 metres (95 ft) wide with a depth of three metres (ten feet), which limited the vessels that could use the canal to 300 tonnes displacement.

Boat horses were the prime movers of the Industrial Revolution, and they remained here at work until the end of the 19th century. A horse, towing a boat with a rope from the towpath, could pull fifty times as much cargo as it could pull in a cart or wagon on roads. In the early days of the Canal Age, from about 1750, all boats and barges were towed by horse, mule or humans (Song of the Volga Boatmen). Many of the surviving buildings and structures had been designed with horse power in mind. Horse and/or human drawn boats were used on Eider Canal for commercial daily transport. 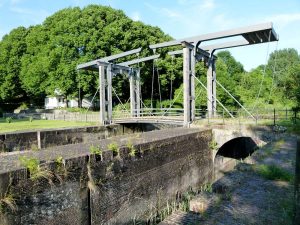 During the 19th century, after Schleswig-Holstein had come under the government of Prussia (from 1871 the German Empire) following the Second Schleswig War in 1864, a combination of naval interests — the German navy wanted to link its bases in the Baltic and the North Sea without the need to sail around Denmark — and commercial pressure encouraged the development of a new canal.

In June 1887, construction works started at Holtenau, near Kiel. The canal took over 9,000 workers eight years to build. On June 20, 1895, the canal was officially opened by Kaiser Wilhelm II for transiting from Brunsbüttel to Holtenau. The next day, a ceremony was held in Holtenau where Wilhelm II named it the Kaiser Wilhelm Kanal (after Kaiser Wilhelm I), and laid the final stone.